I am in love with Miranda Fair Westfield Shopping Centre! True story…..

In fact, I get a feeling of absolute happiness and peacefulness when I enter those big sliding doors and my size 7.5 shopper’s feet hit those beautiful pearly, white, glossy and pretty tiles. All my natural instincts become on high alert, I feel so alive. The smell of food, the warm sound of shoppers chatting, the cool air-conditioning on my face and the spectacular lights.  It’s a school day too, I am without my kids and Cecil, there is no such thing as rushing today!

My wide eyes alert very much like a lioness who has lost her favorite baby cub.  I just can’t take in enough information. I hunt the shop windows, with a starving hunter’s instinct to find “Sale”, “Everything Reduced”, “50% of all Sale Items” “Two for the Price of One” or “One Day Sale only”. These loud signs scream at me like Dracula gets called to a grave yard and I, at times, feel a bit like what Shane Warne must feel when he has a mobile phone (debating whether to send an inappropriate text message or not!?).  I like Warnie, cave in and I am lured into shops to spend money on items that make me incredibly happy, completely satisfied and so in touch with that wanna-be/try hard celebrity that lives inside my soul.

I try on these wonderful clothes that are priced way above my depressing legal secretary salary! I feel so happy. Under the Westfield dimmed lights, I can feel and hear that trapped wanna-be/try hard celebrity that lives in my soul, she forcefully instructs me to:

“Spin three times in front of the life size mirror with you prospective purchase”, “pull your stomach in woman”, “stand on your tippy toes”, “pout your lips” “you look good!”, “Mmmmm… you look very good”, “gee you look good”, “this dress is made for you”, “not bad for 41 love and you have had 3 kids, not bad at all!”, “now let’s get a side view”, “pull in your stomach a little more”, “never know what is around the corner? You may get kicked by a donkey and be dead next week! Live for now, just get it! GET IT”.

The hunt is finalised and the credit card is bleeding BUT the dress is mine. I am then hit by a sense of guilt! Negative thoughts roll on in:

“That was expensive!”, “I really can’t afford that dress”, “geez, I really need to pay the kids’ school fees this month”, “what about the darn house renovation? we are supposed to be putting a second level on”, “what will my Cecil say?”, “my poor Cecil is still wearing clothes from the 80’s”, “lovely Cecil what is he up to today? He works hard! I better phone him”, “Oh well, I might be dead next week, I might get bitten by a snake or kicked by that wild donkey, who knows? I better get the dress”.

I feel quite down for about 5 minutes after the completion of the hunt! I really need a coffee, I need to sit and I need to check my phone. I waddle on those pearly white tiles to my favorite coffee shop.   I reveal my purse again and buy myself a skim milk cappuccino and a slice of chocolate cake. No food guilt in Westfield today as I looked damn gooooood in that dress (under those dimmed Westfield lights and that Westfield mirror)  and “I might be dead next week, who knows what is around the corner? I could get attacked by bees and die a painful death in my backyard” – so I eat the chocolate cake.

I am then reminded of the time, it is 2.30 pm, have I really been here for 5 hours? Yes I have… caught up in my own little Westfield World – time has no meaning and at times, neither does my money! It is about now that I remember I am NOT a celebrity, “Oh shit.. what am I going to have for dinner tonight!? What am I going to feed them!”, it has been an expensive day!”

Soooo…. I buy a BBQ chook! Only because I can’t be stuffed cooking tonight (again), life is too short.. who knows what is around the corner!!!??

Live in the moment and buy that dress or whatever tickles your fancy!!

Giddy UP and be careful of wild donkeys!

This week my younger brother (although he does look a lot older than me) posted a picture on Facebook of his beautiful little boy, dressed up as a girl.  He had makeup, a dress, blue eye shadow, lipstick and a wig.  Of course, the person responsible for this was his cheeky older sister!  My little nephew (lets call him Mr T) looked so cute.  Mr T is one in a million.  He is wild, crazy, smart, incredibly funny, says very random comments, has no ‘off’ switch and has a smile that would melt anyone’s heart.

As I looked at this funny photo, I was reminded of my own childhood, and then was quite humored yet disturbed by some childhood memories I had stored – some terrible things I used to do to my poor little brother. For privacy issues let’s call him “Ethel” – you will understand why as the story goes on…

I am almost 3 years older than Ethel, as kids we were like any other average brother and sister.  Good parents, a Dog, a Budgie, a Toyota we called “Terry” and we had huge fights, that involved punching, hitting, pinching, pulling hair and biting (Ethel was a biter).  There were times, however, we were the best of friends, often playing games of “shops”, (I was always the shopkeeper), pool games (I was always “Polo”), BMX rides (I was on a horse), Patridge Family Karaoke (I was Laurie on percussion, Ethel was the young red headed brother, Danny Bonaduce), Young Talent Time Karaoke ( I was Danni, Ethel was Vinnie), hanging with neighbors, cousins and many family shin digs.  All in all, it was a very happy and loving childhood.

We would often go to our Grandparents for the school holidays, where we would spend so much time with our cousins, who were all the same age (although I do look a lot younger than them).  Cousins – some of the best memories of my childhood consist of my cousins.  Even though we don’t see each other much these days, the bond is still there – and the memories never fade, each time we get together, the same stories get told and it’s a time you really get back to your real family ties.

Ethel (at 6 years old) was a lot like Mr T – slightly crazy, often in trouble, wild and allowed his big sister (me) to dress him up as a girl.  I would sternly say to a cute Ethel:

“Simple as this Ethel, if you want to come along with me and the cool cousins, you have to wear Aunty Sadie’s bra with big oranges stuffed in the cups, with her curly black wig, her floral dress, hand bag, high heels and you must call me “Mummy” all day – it doesn’t matter that I am only 9 years old myself, but call me Mummy and we will all call you Ethel!”

Poor Ethel, he was only 6 years old! He did all of the above and went to the city dressed like this. We called him Ethel all day long and he wore oranges strapped to his chest in his over shoulder boulder holder! We made him go into the Women’s Department at “GRACE Bros” and ask the shop assistant where he could buy a bra? Oh the pain….poor Ethel.

Growing up, I was lucky enough to have a horse. I would ride for miles and miles on my horse, and Ethel would often ask if he could come with me. Of course being the awful sister I was, I would say “No Ethel, go away you are not coming with me and my super cool horse friends’.

What is that fake Police Siren I can hear? “Eeee aaawwww eeeeee awwwww” – I would look over my shoulder from upon my high horse and in the distance I could see this miniature gold and black BMX bike with a Police siren attached to the handle bars and blaring. It was poor little Ethel, he had ridden his bike to try and find me on my horse. He would ride that bike for miles, with his little Police siren! I would be NATURALLY so unimpressed, as now I would have to look after him and make sure he could get that bike up all the hills whilst I just sat there on the fat horse!

I am ashamed to let my readers know, that in a rage as a small little girl, instead of pinching or pulling Ethel’s hair, I actually kicked him in his crown jewels, not once BUT twice!  On one occasion Mum had to take him to the hospital as his left testicle twisted….  Oh the shame………poor little Ethel….. 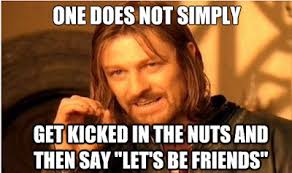 I could write many memories down of my dear little brother and the awful big sister – I truly was. I wasn’t always nice to him, hardly ever actually, but I loved him and was very protective when I had to be.

He was my best little mate, and still is. I tell my own children these and many more stories, and say, one day “Your brother or sister will be your best friend” of course, they don’t believe me.

I am very lucky to have a brother like Ethel. He always helps me, no matter what time of the day.  He is a good bloke.

We still have a many disagreements in life, although I am happy to report that the biting, pinching, hair pulling and the kicks to his nuts have ceased.

Looking again at the picture of my lovely nephew Mr T, I really do think he is getting off lightly! 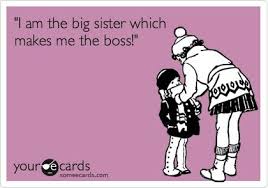